Original Post can be found on the Rising BRICSAM Blog.

On the other hand, BRI refers to global infrastructure development projects led by China to promote international cooperation, multilateralism, and trade. It may appear that these two sets of foreign policy approaches rather conflict. However, the phrase “A Community of Shared Future for Mankind” (人类命运共同体), a part of the official narrative of China’s foreign policy may have led to both of these contrasting approaches. What is “A Community of Shared Future for Mankind”? How does this phrase explain trends in China’s recent foreign policies including WWD and also BRI?

What is “A Community of Shared Future for Mankind”?

By literal translation, the above phrase means “A Community of Shared Fate for Mankind” (SF) rather than, as it is often expressed in English, “A Community of Shared Future for Mankind”. SF suggests a global order described by China’s President Xi Jinping encompassing the shared rights and responsibility of each nation in terms of “politics, security, economy, culture, and environment” in a globalized world. In President Xi’s words SF is: “to build A Community of Shared Future for Mankind [to] construct a beautiful and clean world with long lasting peace, general security, mutual prosperity, openness, and inclusivity”. At a United Nations Economic and Social Council (ECOSOC) meeting in July, 2020, China’s Foreign Minister Wang Yi argued that China will push to build SF by promoting multilateralism in accordance with international laws and “… denounce global hegemony and protectionism”. These and other  remarks by China’s leaders demonstrate, it would seem, the Chinese Communist Party’s (CCP) ambition to achieve greater global influence, and that China is prepared to work with all nations to build a SF. Indeed, not all nations may be agreeable with the ideology of SF. It is inevitable that the CCP will face some frictions when it tries to expand the influence of SF in the world. Therefore, the CCP may have to use a tailored approach in its foreign policies to push its SF agenda.

SF as an Umbrella term for China’s Foreign Policy

President Xi has publicly made statements such as “[the CCP] will reference history and create the future. It must continuously push and construct A Community of Shared Future for Mankind”. Under this guidance, top Chinese officials have made clear that China’s foreign policy will revolve around SF. China’s approach to global order, then,  promotes politically correct topics such as climate change, global disparity, and it also opposes terrorism and hegemony. Although it encourages cross-cultural exchange, it makes no explicit mention of protecting the rights of marginalized communities. The vague language in the SF permits CCP officials greater flexibility in deciding what kind of matters are consistent with the SF and therefore align with President Xi’s agenda.

The chart below summarizes non-exhaustive different themes in SF and how each theme leads to China’s foreign policies. 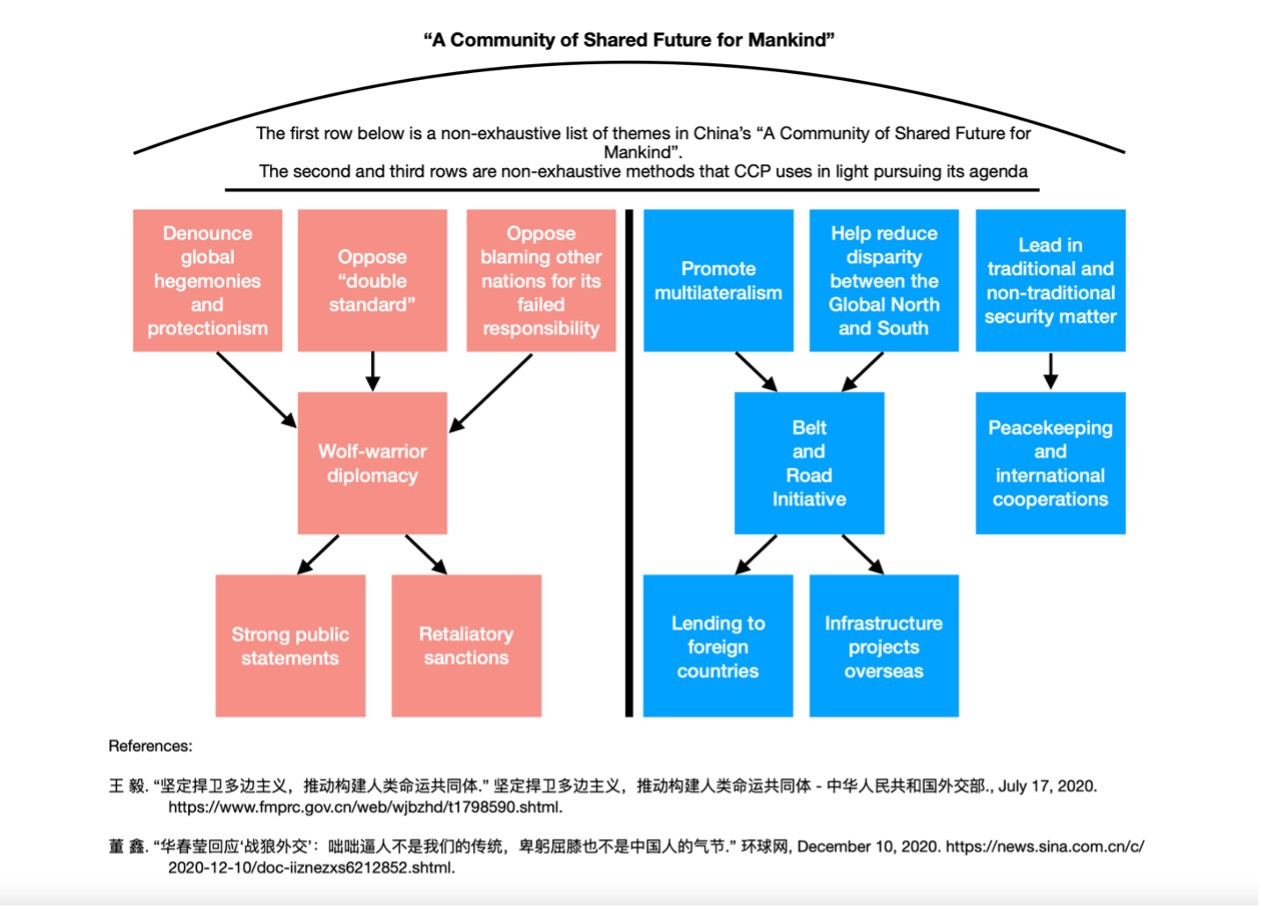 The SF framework, however, does reveal contrasting foreign policy approaches. With one approach, BRI China strives to contribute to build a trustworthy and respectable image. With the other, China’s WWD advances “undiplomatic behavior” damaging China’s international image. Amid the pandemic, the CCP appears to want to repair its international image more than ever; yet China also seeks to demonstrate its new found and more powerful global position. Having both friendly (sending aid to the Global South) and hostile (WWD) foreign policy approaches appears to generate contradictory approaches to global order. WWD and BRI, it would appear, in a rather contradictory fashion demonstrates the CCP’s self-identified importance and greater support in the global political arena under the SF banner..

Although China’s foreign policy appears to be convoluted and contradictory, it is clear that each strand of its foreign policy sends the message that “the China under CCP rule has become strong and powerful, and nobody should humiliate China as the great powers did 100 years ago”. Ironically, however, WWD may have led some to distrust the CCP on the global stage. Such policies and behavior are reflections of the CCP’s longstanding anti-West sentiment. The country may have economically transformed itself, but historic landmarks such as the Korean War, the Great Leap Forward, and SF in recent years demonstrate the CCP’s continuing distaste for the American-led Liberal International Order and iChina’s ambition to eventually overtake it. Under President Xi’s rule, the ideology of SF further reaffirms the CCP’s agenda to denounce the West and build a more Chinacentric global order. For the CCP to openly express its distaste of Western democracy may in fact result in China facing unintended consequences. By labelling Western powers such as the United States, and the European Union as hegemonies or bullies of the world, the CCP may seem as a victim and badly disguises its anti-West sentiments. This leads to the rationale behind both the BRI  and WWD under the same SF framework.

From the Western point of view, spending such large sums under the BRI seems rather curious, with no evident return.  The CCP, it would appear, however, has its own justification and rationale for the policy. Despite the controversies about BRI, it is an essential part of SF. The successful implementation of BRI will help the CCP to further legitimize the SF policies and initiatives to more nations. Even though some countries and projects pursuant to the BRI may not be directly helpful for profit and economic growth, the importance is to create ties among many nations with Chinese foreign policies and principles of SF. While the idea of BRI is said to be promoting multilateralism and international cooperation, the ultimate goal appears, it seems, to be creating a new global order led by the CCP under Xi’s new SF ideology. For the CCP to achieve its ambition, it requires finding the right tone and narrative in its foreign policy.

Currently, the conjoining of these two initiatives – the BRI and the WWD, however, may yet prove to be less successful than the CCP leadership hopes. The dilemma has not been solved under the SF banner.

The Life and Times of America’s Liberal International Order: A Reflection of Power Politics, Not an Escape from It